skip to main | skip to sidebar

The anti Spore blogger has struck again. He now shows us a new video of a pretty lame creation in Spore and tells us that you should need a photo identification to prove you are of age to watch this.

WARNING
You should not be afraid to watch this.

Then he tells us that at least "god's" creation is much more beautiful than this. Yes it is so why be afraid of it?

EA Stock is down

Today EA’s stock is down almost a dollar.

I hope that the information about Spore I am making available helped in some small way.

The Evil man behind it all - Will Wright

Yes, the anti Spore blogger is now turning this towards the creator of spore, my god has he shown us all how evil can take hold of us human and mislead us from reality so called GOD!

In the anti Spore blogs sixth post he tells us how he first came to like Will Wright, how he loved him for creating The Sims. This game was a huge success and many expansions followed. But then the anti Spore blogger says something I really can't compute.. Let me once again qoute

"I used to like Will Wright. He created Sim City, a fantastic game that celebrated the earth that God created for us and allowed you to use all your God given abilities to make an ideal society. But if you ever felt like you had too much power, God would come in with a tornado or an earthquake and put you back in place."

Geeeeeeze this guy is out of his fucking mind! First of I don't really think Will Wright had any plans on celebrating the earth that this so called "god"-fellow created (god=evolution). He just made a game fun for almost any age, and why? I don't think you really have to ask, but if you do the answer will be at the bottom of this post.

Then this stupid (I'm getting a little frustrated) anti Spore blogger goes on telling us that apparently Will Wright is a member of the Episcopal Church, he now can't understand how a man of this statue can possibly create this game. Oh? But what now, he suddenly goes on changing the subject and tells us that the Episcopal Church is perverted for it is the only church in america that ordains homosexuals on a regular basis.

Then he writes that evolution might not be the only thing we should be afraid of in this game.

Whoa, this man really hates everything. Not only Spore but also Will Wright gay people? Correct me if I'm wrong but to Love thy neighbor as thyself, does this not include every man or woman gay or straight?
Upplagd av Peter Svanberg kl. 18:47 Inga kommentarer:

Not for children? Yes it is.

So this guy is going on and on about Spore and how inappropriate this game is for his poor 7 year old child.

He now asks how EA can let this be in the game:


[quote] How can EA allow this in a game? This is not funny, this is not cute. Completely unacceptable [end quote]

Yes it is!! It's hilarious if you have humor. Maybe not for all but for many. This is completely acceptable!
Upplagd av Peter Svanberg kl. 18:37 Inga kommentarer:

It takes a village to raise a child

And according to the anti spore blogger it takes 8,500 employees at Electronic Arts to corrupt a child’s mind.

8,500 people all working together and not a single one with enough Jesus to stand up and say what they are doing is wrong.

It makes him sick.

If you look at the comments about his posts during his rage against Spore, there has been a few hundred posts from people trying to tell him that he's doing something wrong.

This guy is totally going nuts.. Let me explain.

[quote] Whatever happened to the days when National Geographic simply showed us footage of all of Gods beautiful creation all around the world? [end quote]

Don't worry they actually do it still, you just have to tune in a little more.
So, NG is doing a show of how you can create better creatures in the game Spore. Obviously they mean more powerful, stronger and clever. This is not impossible with a computer and none the less with a cheap computer game when that is the whole principle of it.


And hey! By the way, if you honestly think that this is a beautiful looking animal you need help.
I
\/ 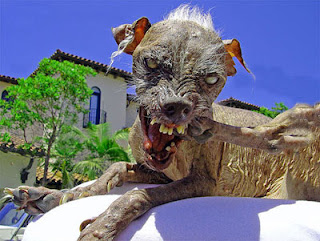 If you only were refering to us humans as beautiful you should visist http://www.uglypeople.com
Upplagd av Peter Svanberg kl. 18:17 Inga kommentarer: 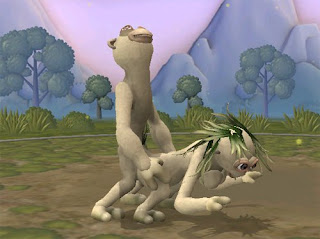 [quote]
"The game goes beyond just demon-alien looking creatures.
It turns out that there are also human looking characters who do things reserved only for games with an M rating.
I would love to hear a comment from EA on this one."[end quote]

Let me answer this one for you so you don't have to EA yourself.
:: Well as you can see this are not "human looking", if you do think so I just have one question for you... Is your family inbred? Sure you could say that it's a humanoid [ http://en.wikipedia.org/wiki/Humanoid ]. This picture is obviously created by a teenager undergoing puberty, I don't think that you have to worry about your seven years old child trying to create pornographics picture in this game.. Though the picture made me laugh.
Upplagd av Peter Svanberg kl. 18:05 Inga kommentarer: